Posted by Irene Koehler in Business, Twitter on October 4, 2012 | 2 responses 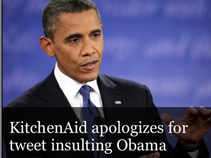 Bad things can happen to any business or brand. You do your best to avoid it; you hire the right people, make the right products, make the right decisions. Sometimes, though, things still don’t go as planned and something, someone screws-up. It’s often what happens next that can make, break or save a brand’s reputation. One well-known, household brand had a bad thing happen last night. Luckily for the rest of us, we are able to take a step back and view what happened from a safe distance and learn from their experience.

This blog post isn’t about what happened. It’s about the thing that happened next – after the first thing had happened. Confused? Hang in there; allow me to explain. This is important because there are critical lessons here for all of us using social media for business.

As is the norm these days during large events, people were sharing their thoughts and observations during the Presidential Debate which took place in Denver, Colorado last night. Among the millions of debate-related tweets on Twitter, there was a completely insensitive and inappropriate tweet about President Obama’s grandmother. Many people were especially surprised and offended to see that the tweet had come from a well known brand, KitchenAid.  The backlash against KitchenAid from people discussing and complaining about the tweet was immediate and loud. Within minutes, the blunder had become visible to many online and was already the subject of numerous news articles. While brands want to gain visibility in front of new audiences, this is not the way they’d like for it to happen.

For those of us who are heavy social media users, it was easy to see how this probably happened. I assumed that someone with access to the KitchenAid Twitter account, someone on their social media team, had intended to post the tweet from their own personal account, but accidentally posted it to the KitchenAid account instead. There is no way around it; this his is an enormous mistake. It turns out that my assumption was correct. Within minutes of the now-infamous tweet from the KitchenAid account, it was deleted and reappeared on an individual’s personal Twitter account. Was this the person responsible for publishing the tweet from the KitchenAid  account? I don’t know with certainty and, for purposes of this post, it really doesn’t matter.

No matter how long the tweet had been live on the Kitchen Aid account prior to being removed, the damage had been done. Instantly, there were numerous complaints, some even going so far as to suggest customers boycott the company.

Things move very quickly in the world of social media. Brand missteps are shared at viral speeds, meaning that with each passing moment, the number of people who are joining the conversation about the misstep increases exponentially. The huge mistake that many brands make at this moment is waiting. They are unsure of what to say and who should say it. They haven’t taken the time to set up a crisis communications plan, so they aren’t even sure who has the authority to speak on the brand’s behalf in response to the outrage. All too frequently, the decision is to wait to set up a meeting – a meeting at which all of these decisions and next steps will be spelled out in detail. Meanwhile, people continue to complain and the volume of unhappy voices grows louder in the absence of any response from the company.

It is here that KitchenAid, specifically Cynthia Soledad, gave us a lesson in how to address a rapidly spinning out-of-control problem. Cynthia is the Senior Director of KitchenAid Brand and Marketing Services. Don’t get me wrong, they did screw-up – and in spectacular fashion. Still, once that screw-up had already taken place, what they, what Cynthia did, was right on the money. As the tweets appear in reverse chronological order in the image below, meaning that the most recent ones appear first, let’s start at the bottom of the image and work our way up to examine what she did.

1. An immediate apology. There is no attempt to explain or excuse what happened. An apology straight away. Additionally, the #nbcpolitics hashtag is included, as it was in the original offending tweet, to make sure that the apology is visible to the same audience.

2. Pull back the curtain and be human. Often, on big brand social media accounts, the team goes to great lengths to speak with the voice of the brand. Cynthia made just the right move to step out into the open and identify herself.

3. Targeted apology. Another apology, but this one used the President’s Twitter username, to personalize the apology as the offending tweet was personal.

4. What happened. This is all we need to know. Frankly, I’d say that the fact that we’re told that this person won’t be tweeting for them any longer goes beyond the information we have a right or need to know. There were comments from people demanding to know if the individual was fired. Not only should this not be our concern, it is none of our business as it is an internal matter for the company to deal with as they see fit.

5. Be accountable and accept responsibility – period. I have no knowledge of the specifics of this particular situation, but I can only imagine that Cynthia, her coworkers, her boss and members of the social media team were and will be having some frank and unpleasant conversations. There will be plenty of time to second-guess the decisions that led up to this moment, but  a good leader steps up to take responsibility without qualification.

6. Outreach. Cynthia then took specific steps to contact media outlets which had written about the blunder and the resulting anger. By contacting them directly and publicly on Twitter, other reporters and bloggers took note of her willingness to make herself available for interviews. 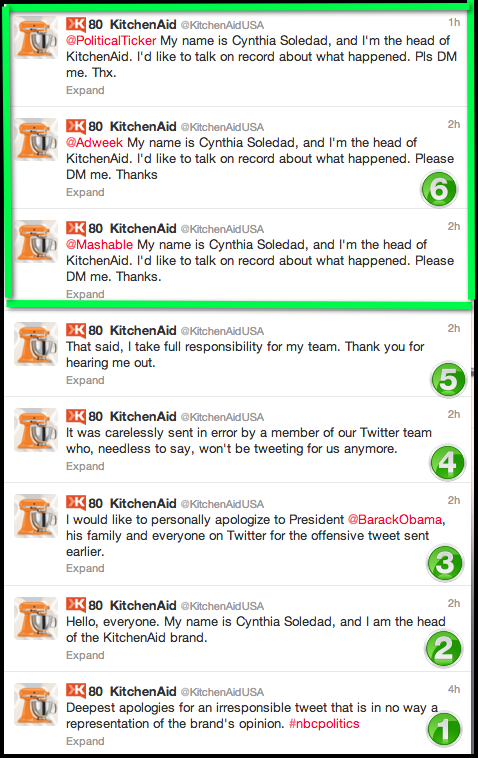 KitchenAid’s authentic response within minutes of the original tweet seems to have changed the story significantly. There is no way to undo what had been done, but changing headlines on news stories from “KitchenAid Insults Obama” to “KitchenAid Apologizes for Insulting Obama” is huge.  Equally important is the fact that sentiment of commenters online shifted significantly from a roar of complaints to many thanking Cynthia for her openness and quick apology.

It is not all hearts and roses for KitchenAid. This stain on their reputation won’t disappear right away, but had the response not been as quick or as authentic, KItchenAid would have been dealing with a public relations problem of a much larger magnitude.

A tool to view a lot of Twitch stats easily and free of charge.

Mauricio Luque - November 1, 2021 0
A technical analysis compares the performance of Xbox Cloud Gaming on Xbox One to that of the console hardware itself. The result? Cloud gaming...

Mauricio Luque - October 28, 2021 0
Among Instagram's most interesting options is that of sharing links through stories. It is an ideal tool for content creators, as they can optimize...

Why are Russians reluctant to get vaccinated against COVID?

Theresa Taboada/Press releases - October 28, 2021 0
Starting this October 28, businesses and other public places will remain closed in Moscow and its surroundings. Only pharmacies and premises selling food will...

New MacBook Pro is as beautiful on the inside as it is on the...

FDA approves reduced dose of Pfizer vaccine for children 5 to 11 years of...

Theresa Taboada/Press releases - October 27, 2021 0
After more than seven hours of meeting, the experts of the U.S. regulator's advisory panel gave the green light to the recommendation, with 17...

Is Your Mac Slow? Check for Viruses First

George Thompson - October 27, 2021 0
Apple devices are robust and reliable; that is why Mac computers are more costly than Windows PCs. Most people prefer purchasing a Mac since...

ABOUT US
We work hard to bring best tech news to you every day because computers are not so good for this job ... yet.
Contact us: email@technationnews.com
FOLLOW US
© Tech Nation News is another website of Lexur
Posting....