Our family spent the last two weeks in one of my favourite cities, San Francisco. (“One of,” Portland. Don’t get into a snit.) Our home was perched on a hill in North Beach, where you can’t walk two steps without tripping over a contour line. 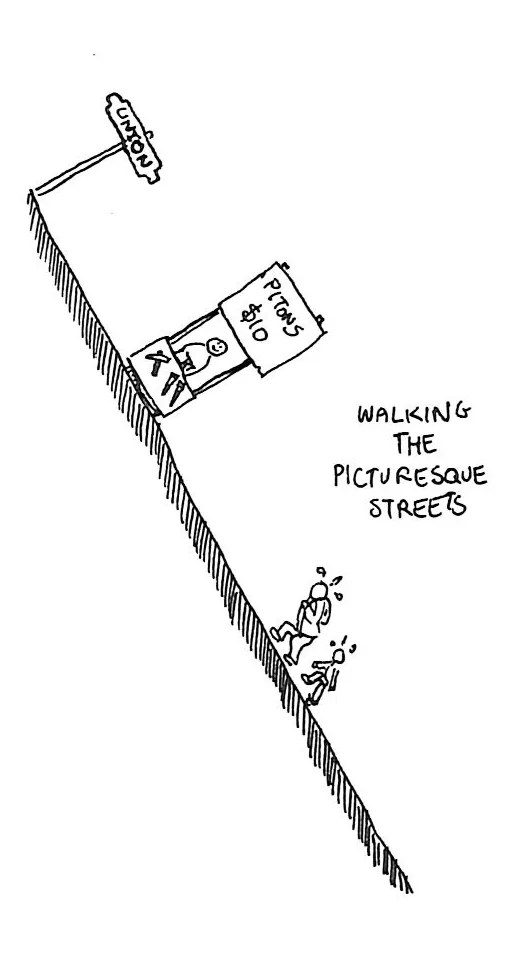 This being a family visit, we hit some of the more child-friendly sites, including the temporary home of the Randall Museum, which included a menagerie of rescued and domestic animals: a raccoon, chickens, ravens, crows, a barn owl, guinea pigs, a rabbit… the kids loved it. That said, I have a proposal for livening things up a little. I’ve resisted visiting Fisherman’s Wharf, even though I’ve been to San Francisco a half dozen times or so. This time, I gave in, because my daughter wanted to see the sea lions at the marina.  The Wharf itself bore out every tourist-trap fear I’d had of the place (enjoy my Yelp review!)… but the sea lions themselves were delightful. Except when the wind shifted once or twice. 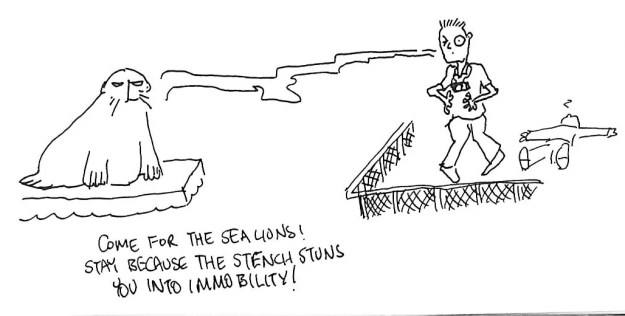 We loved the California Academy of Sciences. Try prying your kid away from the butterflies. Just try. You’ll feel like a war criminal. We’ve been to the Exploratorium before, but not since they moved to the Embarcadero. It’s a great place to spend the afternoon, although I was a little disturbed at just how much one of my kids enjoyed bringing me to the brink of nausea at one of the displays. 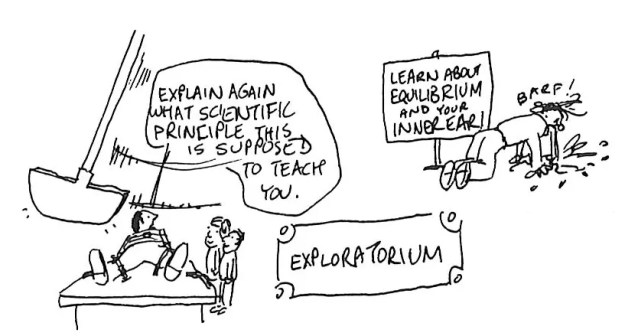 We stayed at a beautiful apartment with a stunning view, including the TransAmerica Pyramid. When TransAmerica’s first CEO died, he was interred there, along with all of the company’s original employees (it was billed as a “fun visioning exercise—there will be pizza!”). 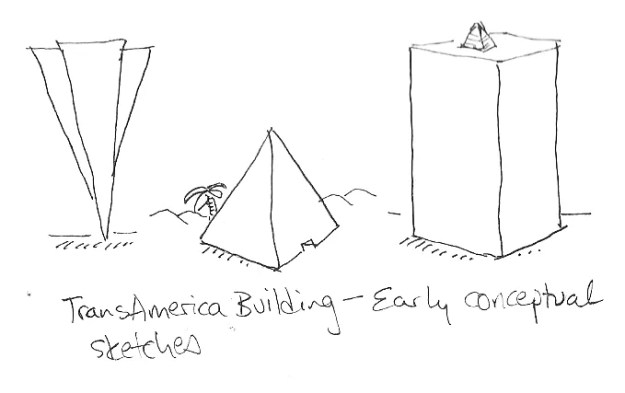 We never did convince the kids to go to the cable car museum. I can only guess as to the actual underlying mechanism, which I think uses underpaid elves. 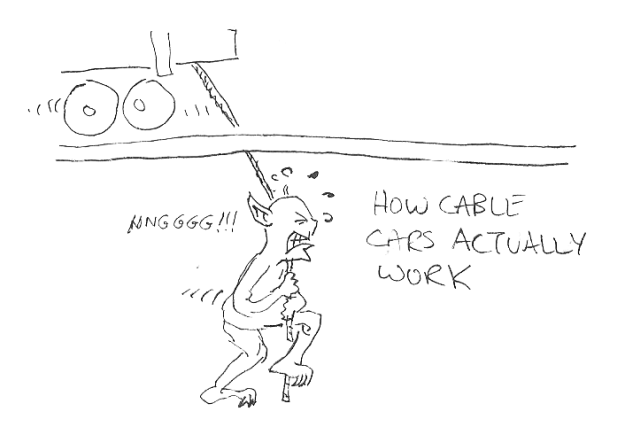 The ornateness of some of the houses in this place is just out of control. Dial it back, San Francisco. 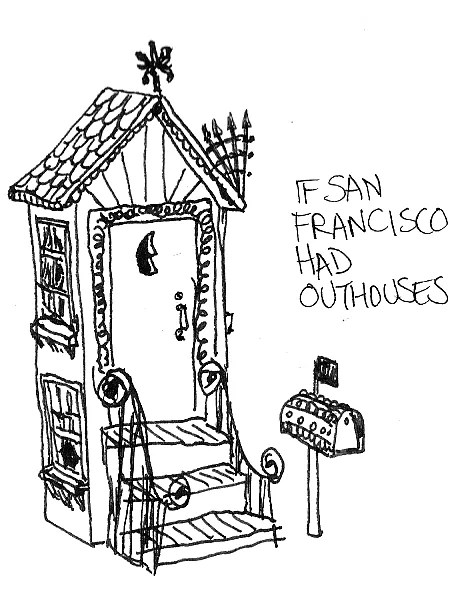 These people are very, very serious about their coffee. Or maybe it’s just the Silicon Valley types, who’ve turned it into yet another gadget to tinker with. (Don’t believe me? Try speculating loudly in a coffee shop about whether pour-over or AeroPress coffee is better, and then slip quietly outside in the ensuing mayhem.) 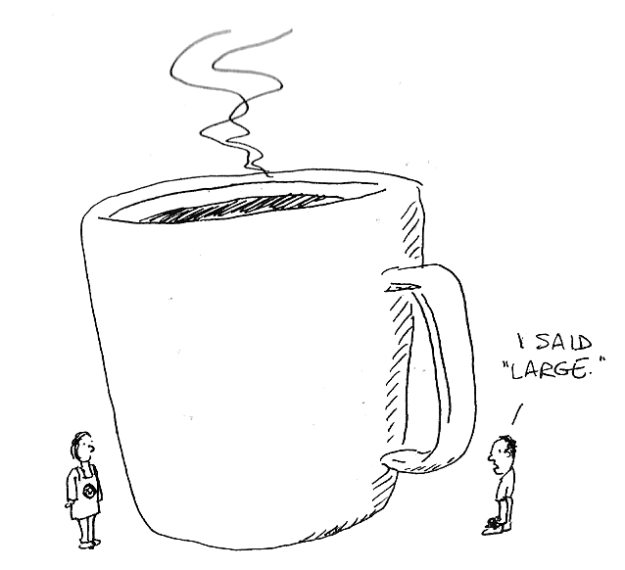 I bought myself a belated birthday present—a new-to-me camera lens—from a tiny but tidy store called Camera Heaven on Larkin Street. The owner, David, gave me a decent deal, and folks on Yelp say he’s great with both sales and service. In a city that’s becoming more expensive every day, I don’t know how he’s making a go of it, but I hope he continues to. Back to the kids. We dropped by the Golden Gate Fortune Cookie Factory, which sounds like it should be a sprawling complex employing hundreds, but is in fact about the size of half a Radio Shack. The visit was brief (the only way you could conceivably make it last more than 10 minutes would be to submit a job application), but a lot of fun. And watching them try to break open a giant fortune cookie afterward was easily worth the purchase price. 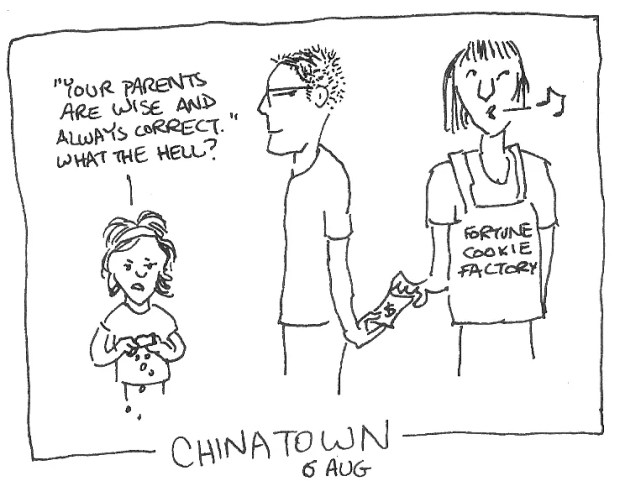 Many books were purchased. Many bookstores were visited. One last little lesson we learned from our trip… Facebook will check accounts with many followers to identify fake profiles

Terra Battle, the mobile game from the creator of Final Fantasy will close its...

Mauricio Luque - May 29, 2020 0
Hironobu Sakaguchi, the creator of Final Fantasy, left Square many years ago to found his own studio, Mistwalker. After releasing several JRPGs on consoles,...

Xbox Series X will be backwards compatible with “thousands of games” at launch, adding...

Mauricio Luque - May 29, 2020 0
From the original Xbox to Xbox One, Microsoft's new console will be compatible with titles from all previous consoles as announced by the company....

Facebook will check accounts with many followers to identify fake profiles

Mauricio Luque - May 29, 2020 0
Facebook announced that it will check out the people behind profiles with large audiences. According to the company, they want to make sure that...

Confirmed the sequel to ‘Sonic. The movie’

Mauricio Luque - May 29, 2020 0
No one trusted 'Sonic' too much. When its first trailer was announced it was unanimously rejected by the fans, which led to a total...

Mauricio Luque - May 29, 2020 0
May 2018 saw the release of Cobra Kai, an original YouTube series that brought back the iconic characters from the Karate Kid films. The...

U.S. adds more than 41 million unemployment claims due to crisis

Mauricio Luque - May 29, 2020 0
More than 2.12 million people applied for unemployment benefits in the United States last week, bringing the total number of requests in two months...

Mauricio Luque - May 29, 2020 0
Minneapolis Mayor Jacob Frey has declared a local emergency in this Minnesota city because of the riots that broke out over the death of...

Sherlock Holmes will have a new open-world game