Posted by Irene Koehler in Facebook, Networking, Tips on June 18, 2012 | one response 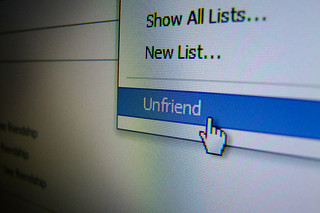 Ah, our Facebook friends. Some we can’t live without and, well, then there are those other ones. It is the latter group that I’m focusing on today. We all know people like this, right?The chatty co-worker, the family member who can’t keep a secret, that pretty girl you sat next to in junior high school. Wait a minute…if we all know people like this, is it possible that you might be one of those people, too?

We were excited when we first friended you on Facebook. It’ll be a fun way to stay in touch, we thought. It’ll be a great way to get to know you better, we thought.  That was then, before we got to know the Facebook version of the person we thought we knew and now we’re reconsidering our Facebook friendship, wondering if it’s time to cut our losses and move on.

We all have our own style and preferences for how we use Facebook, and this is as it should be. There is no one right way to use social media, but there may be one (or more) right ways that are the best fit for each of us. Ever since I wrote about the reasons I unfollow people on Twitter, I’ve been asked to share a similar list of deal-breakers which might lead me to unfriend someone on Facebook. These aren’t rules that everyone must follow, these are just my own preferences. Breaking up a Facebook friendship can be a bigger deal than unfollowing someone on Twitter. Even I’ve been known to get my feelings hurt when I thought a Facebook friendship was in jeopardy. That said, in no particular order, here are just a few ways to move our relationship from friends to ex-friends:

That’s my list. Did I hit on your pet peeve or would you add something to the list? Let me know in the comments below what would lead you to unfriend someone.

Hack into the Twitter accounts of Elon Musk, Bill Gates and other celebrities to defraud with crypto currencies

Farmville, the legendary Facebook game, will disappear along with Flash Player at the end...

Rocket League, after moving to free-to-play, sets a record of more than one million...

Mauricio Luque - September 25, 2020 0
Since its arrival, Rocket League has stepped up to the plate. Having been a free title at PS Plus during its debut month helped...

Ring Always Home Cam, an autonomous drone that flies over the home

Mauricio Luque - September 25, 2020 0
In the last hours Amazon has introduced a series of devices for the home like the new Amazon Echo and Echo Dot, Amazon Echo...

Among Us 2 is cancelled: its creators will focus on improving the original game...

Mauricio Luque - September 24, 2020 0
Born in 2018 as a low-budget indie project, the multiplayer game of betrayal and deception has jumped to fame this summer to become the...

Crash Bandicoot 4 brings us its launch trailer with the rhythm of The Chemical...

Mauricio Luque - September 22, 2020 0
It's not long before Crash Bandicoot 4: It's About Time comes to stores. The most charismatic marsupial in history returns with a new installment...

Mauricio Luque - September 22, 2020 0
Microsoft has just announced one of the most important movements in the history of the video game industry: the purchase of ZeniMax Media, parent...

Mauricio Luque - September 17, 2020 0
In a statement to the Washington Post, Sony Interactive Entertainment President and CEO Jim Ryan explained that this was the percentage of backwards compatible...

Rocket League, after moving to free-to-play, sets a record of more...

Rocket League, after moving to free-to-play, sets a record of more...