By now most of you already know what the 2015 Moto G will look like , but just when you thought the torrent of Moto G leaks were over , a new one has popped up showing what appears to be one of the official press renders of the device .The Moto G 2015 – which is rumored to come in two flavors  – one a sub $179 GSM only variant and a more expensive $229-249 phone with some good specs and LTE .The basic model of the phone is said to pack a weaker Snapdragon 410 Soc and  2GB of RAM ,8GB of storage +MicroSD expansion and  a 2470mAh battery  with  the same 5″ 720p IPS display derived from the second gen Moto G .The premium model ,which is rumored to carry LTE support is a completely different animal from the basic version as it is rumored to pack a 1.7Ghz Snapdragon 610 Soc with Adreno 405 Graphics  and 2GB of RAM . 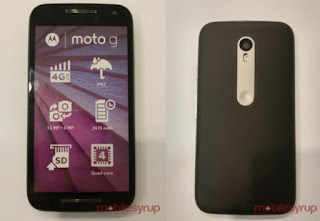 The display of the phone is also rumored to get a 1080p full hd upgrade while retaining the 5″ display size , as for the other specs , the spec sheet is a bit of a mirror of the Snapdragon 410 so you wont miss out much . The LTE version will have the same 13MP rear camera with LED flash and a 5MP front facing unit akin to the cheaper version . The battery is also left unchanged but we expect to see a 16GB storage option on the phone as previous Moto G’s usually reserved the 16GB version for LTE . Both models are expect to have IPx7 water resistance ratings meaning the devices will work even after a submersion of 1m of water for 30 minutes , although it has a water resistance rating , the device is not dust resistant .The Moto G GSM and LTE versions are expected stick to the usual $179 – $199 – $249 price but we wont be suprised if it costs more . Both versions are expected to be unveiled at Motorola’s special July 28th event .

Mauricio Luque - August 8, 2022 0
Twitter confirms hacking of millions of accounts: change your password and these security settings Twitter has confirmed an attack revealing the identity and data of...

Newsroom - July 26, 2022 0
How to Turn Getting Better Sleep Into a Fun Game With Technology There is no one in this world who doesn't want to get better...

Mauricio Luque - July 6, 2022 0
God of War: Ragnarok launches with a cinematic trailer and introduces special editions For several weeks there have been rumors about the release date of...

How to Get Started Using an Analytics Cloud Platform

Mauricio Luque - June 29, 2022 0
Today is the anniversary of a launch that would change the world Today, exactly 15 years ago, Apple launched the original iPhone in the United...

The Most Popular Programming Languages ​​for Mobile Applications

George Thompson - June 29, 2022 0
Becoming a mobile app developer in 2022 is much easier compared to 10 years ago. Today, the resources are plentiful, and languages have evolved...

How to Get Started Using an Analytics Cloud Platform