The Long awaited One Plus two is finally here , the phone – a sequel to the successful One Plus One  of last year was probably one of the most desired smartphones of the era but now the company is back with a updated hardware spec sheet and in house software .

The OnePlus Two smartphone basically looks like a modded OnePlus one – well thats because most of the phone is based on the older OnePlus chassis including the display which hasn’t received any change as well as some of the styling cues . The front of the device now has a fingerprint sensor – which is actually a static touch pad style one similar to the ones HTC uses and does not press in . There are two capacitive  keys which flank the sensor and they can all be customized to launch different tasks if you prefer , the OnePlus Two also supports display default Lollipop touch keys . 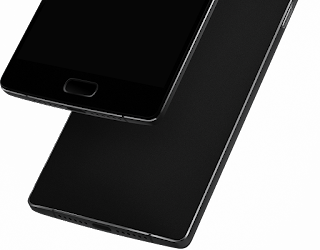 The rest of the specs include a MicroUSB type C port which is a departure from the MicroUSB 2.0 technology used in the old version , this however does have a negative impact as the phone no longer supports fast charging which might make charging a bit of a lengthy process . there is also a rear facing dual (no longer stereo) speaker set up , Dual sim port and a altert/lock slider to the side .

Powering this “flagship killer” is a 1.8Ghz Qualcomm Snapdragon 810 Soc v2.1 – the 2.1 version is said to be a refined version of the Snapdragon 810 which was blamed to produce excessive amounts of heat , the newer version is underclocked slightly and therefore emits a lesser thermal signature than its Snapdragon 810 brethren .The Ram on the device is stated to be 4GB of LPDDR4 but you will only get 3GB of LPDDR4 if you buy the 16GB entry spec  version instead of the 64GB option . both phones sadly do not have any MicroSD card capabilities and the new model is also said to drop NFC

Camera specs of the OnePlus Two is said to come in the form of a 13MP  6 element lens module which features Laser autofocus , the module has optical image stabilization as a f2.0 aperture and 1.3 um . The rear sensor captures 4K video recording while the front facing wide angle 5MP sensor can only record 1080p .

As for the battery – well the OnePlus is surely going to do nicely in this department as it has a 3300 non removable cell . The battery however is not quick chargecompatible (thanks to the MicroUSB port change)so you can expect to put the device to charge for about 3 hours . The battery compartment sits below a removable rear panel which can be removed in order to pop in a personal one of your choice , these backplates will be available on a later date

Availability of the Oneplus Two is still a bit of a challenge as before , you still have to wait for a “invite” and if you are in the first pool of lucky customers you can hope to grab the 16GB version for $329 and the 64GB version for $389  , this however depends on when you will get the invite so if you are already signed up , pay close attention to your email inbox as Oneplus usually gives a very short grace period to make a purchase before the invite expires .

The Importance of ARM Gateway and Network Technology in Edge Computing

California man finds out his ex-teacher is living in a car, raises $27,000 for him

LG gives up: will leave the cell phone business

Mauricio Luque - April 5, 2021 0
It had been rumored on one occasion or another and, finally, it is official. LG, one of the longest-lived cell phone manufacturers, is closing...

The Importance of ARM Gateway and Network Technology in Edge Computing

George Thompson - April 5, 2021 0
Edge computing is rapidly changing data collection, processing, and delivery. The growing demand for the IoT is one reason for driving the need for...

This infinite AI-driven RPG will blow your mind with its stories and answers, and...

Mauricio Luque - April 2, 2021 0
Surely if someone proposes you to play a conversational RPG like those of yesteryear, you will think of other ways to spend your free...

How Does IT Downtime Affect Employee Wellbeing?

George Thompson - April 2, 2021 0
IT downtime is something that most business owners strive to avoid as much as possible because it negatively impacts productivity and customer experience. You may...

Mauricio Luque - March 23, 2021 1
Microsoft and Xbox are in negotiations for the possible purchase of Discord. This is what Bloomberg assures based on its sources, a media that...

Mauricio Luque - March 22, 2021 0
Since almost all social networks have been expelling Trump for inciting hatred and violating their policies of use, the former president has decided to...

Whereby: video calls without applications or installations, just with a link

Mauricio Luque - March 20, 2021 0
Remote meetings have been a constant feature of our lives for months, and most of us have had to try a wide variety of...