If you are a guitar buff , the audio company Marshall is nothing new to you , with retro inspired Guitar amps and speakers the company slowly shifted to the mobile market with bluetooth speakers ,but now ,Marshall has officially launched a Lollipop based Android smartphone which echoes its retro amp design throughout the device . The phone – named Marshall London , is basically a Snapdragon 410 powered smartphone underneath , the display is 4.7″ and it has a resolution of 720p , the phone has 2GB RAM , 16GB of onboard storage with MicroSD card expansion and a removable back cover which offers a 2500 mAh removable battery and access to sim and Sd card slots . The phone has a 8Mp rear camera and a LED flash , and it has a 2MP front camera along with two Audio jacks if you want to plug in two audio sets and it features a customizable Gold “M” button on top – which you can set in order to launch your favourite music app
.The phone also has two stereo speakers – which Marshall says is the loudest ones on a smartphone , but that’s to be proven , but what ever it , the audio quality will be impressive as the phone features a Wolfson WM8281 DAC amp , a gold scroll wheel at the side – which lets you control the volume and a bespoke DJ app , FLAC and other high quality formats are also supported here . The Marshall London smartphone retails for $499 – which is a high price to pay for such a device , but then again , the removable battery , the audio amp and the Creior designed chassis (which is a Finnish company that designed many famous Nokia’s and Jolla smartphones) and removable battery makes this a good choice if you are into the world of music playing smartphones . 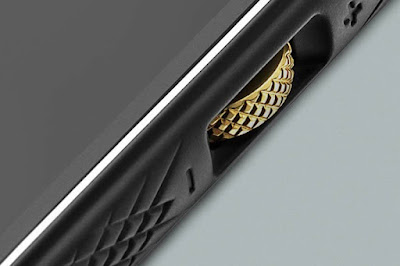 Can a robot learn to walk without anyone explaining what walking is?

Can technology help us be (or seem to be) more polite?

Mauricio Luque - November 13, 2020 0
Samsung already has a new Galaxy S on its way, and if the forecasts come true, it will arrive earlier than in previous years...

Deathloop confirms its release date with a new trailer

Mauricio Luque - November 13, 2020 0
Considering the great level design and gameplay work that the games Dishonored and Prey (2017) had, it's not surprising that Deathloop, the newest from...

Can a robot learn to walk without anyone explaining what walking is?

Mauricio Luque - November 12, 2020 0
What this video represents and means is very important. We are in front of the first robot that learns to walk without any external...

Mauricio Luque - November 11, 2020 0
The new 13-inch MacBook Pro with Apple Silicon is the first professional Mac with an ARM processor, created by the company itself. In this...

Mauricio Luque - October 30, 2020 0
Activision announced this Thursday the minimum and recommended requirements for Call of Duty: Black Ops Cold War, including the necessary free space on the...

Today Pacer is launched on PS4 and PC, an anti-gravity racing game

Mauricio Luque - October 29, 2020 1
R8 Games announces that Pacer, a new anti-gravity racing and combat game, is released today on PS4 and PC with a price tag of...